Cookie preferences
This website uses cookies, which are necessary for the technical operation of the website and are always set. Other cookies, which increase the usability of this website, serve for direct advertising or simplify interaction with other websites and social networks, will only be used with your consent.
Configuration
Technically required
These cookies are necessary for the basic functions of the shop.
"Allow all cookies" cookie
"Decline all cookies" cookie
CSRF token
Cookie preferences
Currency change
Customer recognition
Customer-specific caching
Individual prices
PayPal payments
Selected shop
Session
Comfort functions
These cookies are used to make the shopping experience even more appealing, for example for the recognition of the visitor.
Note
Statistics & Tracking
Affiliate program
Track device being used
Categories
Information
French Knives
The Regions and Their Knives
Brands and Manufactories 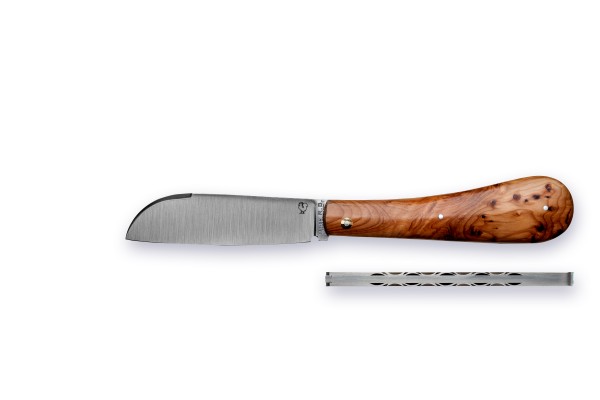 Delivery time on request, please get in touch before ordering

Blade Sandvik 14C28 with swedge and choil, contact with spring suppressed by rivet

The LONDON is a pocket knife with a distinctly maritime character, once a companion and at the same time a tool of sailors and fishermen. The LONDON PassionFrance® is the modern interpretation of this traditional knife by the two-time "Meilleur Ouvrier de France" (mof²) Robert Beillonnet, designed with slimmer, more elegant lines, as a companion for people in an urban world, at the same time with all the features it needs to serve on a boat or a yacht. It is a luxurious knife for the highest demands. In addition to its elegant lines, it has some constructive-functional improvements such as an blade whose contact with the spring is suppressed by its own rivet, typical of the master's handwriting. We produce it in our atelier in Thiers using the most sophisticated materials and blade steels. Choose between INOX Sandvik 14C28, RWL34 or carbon steel XC75. We offer the following decorative alternatives: undecorated springs, hand-guilloched springs, liners decorated on the back and verso. The LONDON PassionFrance® is branded. As a sign of its authenticity, it presents on the blade our emblem, the Coq ... more about the LONDON